8 of our favourite charity Christmas campaigns 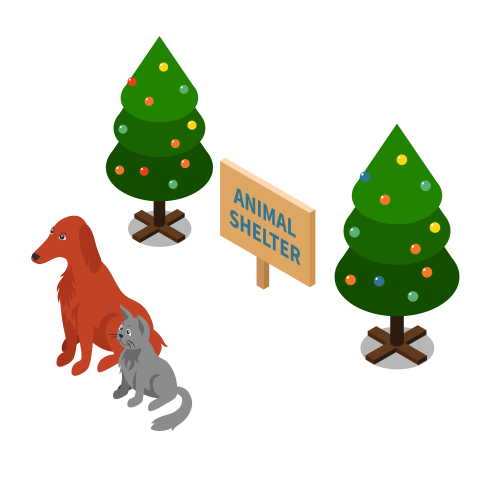 And in the nonprofit sector, that means the launch of charities’ Christmas video campaigns – the fruition of months of hard work and creative thinking.

Over the past few years, there have been some wonderfully moving and memorable videos from all sorts of charities. Here are eight that have impressed and inspired us, from big budget corporate tie-ins to low-fi community endeavours.

When your campaign slogan has become part of the national lexicon, you’ve set yourself an alarmingly high benchmark.

In 2017, the Dogs Trust used their iconic “A dog is for life, not just for Christmas®” slogan – now a registered trademark – to head up a new campaign highlighting the ridiculous but genuine reasons why people give up their pets. The updated campaign features several YouTube video clips of people “breaking up” with their pets because they’re too hairy or friendly – all highly shareable in our digital age.

It’s humour with a serious message behind it.

Cancer charity Macmillan also drew on an icon of British advertising for their 2014 TV campaign – Lynda Bellingham, the famous Oxo mum. In their moving ad, people recite lines from the nursery rhyme Twinkle Twinkle Little Star before hanging the picture of a lost loved one on their Christmas tree.

Viewers who texted or called with a £5 donation were sent a star-shaped photo frame in return. The final voiceover is provided by Lynda, who died of cancer before the ad was aired. Her widower told the media she would be glad her legacy lived on.

So there was a real buzz around this Sainsbury’s advert of 2016, which featured stop-frame animation, singing from James Corden, and a festive message about giving the gift of your time. It raised more than half-a-million pounds for Sainsbury’s partnership with GOSH, allowing families of sick children to be together at Christmas. Altogether, a charity-corporate partnership that warmed hearts and helped families.

Yes, more dogs – but when they’re as cute as these pups, who’s complaining?

This one-minute animation tells the story of Henry, a puppy who wants to pull Santa’s sleigh but is instead delighted to discover that he’s going to learn how to guide a person with sight loss instead. It invites viewers to sponsor a puppy for £1 a week and receive “pup-dates” about their young canine trainee, as well as a cuddly toy.

It’s Guide Dogs’ TV advert for 2019, and we think it will be winning plenty of puppy love this Christmas.

Puppies and kids are not exactly a hard sell at Christmas time. But Alzheimer’s Disease? And medical research? By telling the story of a forgetful Santa, this 2016 animation explains a serious issue in an affecting way. Stephen Fry’s narration invites viewers to believe in the power of research to defeat dementia, and to text ‘BELIEVE’ to donate £5.

Money raised from the Santa Forgot campaign funded 84 research projects, demonstrating that there really is power in believing.

The idea of unlocking somebody’s potential is a very powerful one, and nobody’s highlighted it better than homeless charity St Mungo’s in this 2018 campaign. The one-minute YouTube video features ballerinas, businessmen, doctors and chefs sitting on the streets while an unaccompanied voice sings. Viewers could buy digital gifts, or text to donate.

This is a very social media-savvy campaign, with a great hashtag of #SeeWhatICouldBe giving a hopeful twist to what seems to be a hopeless sight – that of homeless people on our streets.

Fair play to Christian Aid – they’ve avoided taking an easy route here. This 2016 animation, based on TV series Stranger Things, is deliberately unusual – and therefore memorable. By the end, its Christmas message is strong: it’s about offering a light and shelter to people fleeing disaster and war. And its theming and music help it stand out from mushier Christmas fare, making it a distinctive and thought-provoking campaign.

Not everyone’s got the marketing budget of a Sainsbury’s, or even a Dogs Trust. Small charities, with a turnover of less than £1m, make up 97% of the sector, providing much-needed services in their communities and overseas.

In 2018, the Small Charities Coalition celebrated this no-budget, can-do attitude with a video compilation of uplifting clips filmed on mobile phones sent in by volunteers. It’s set to a resounding rendition of Erasure’s “A Little Respect” and invites viewers to donate to #SmallButVital organisations near them.

It shows that Christmas doesn’t need to be big budget – what matters is togetherness. And there’s no more uplifting Christmas message than that.